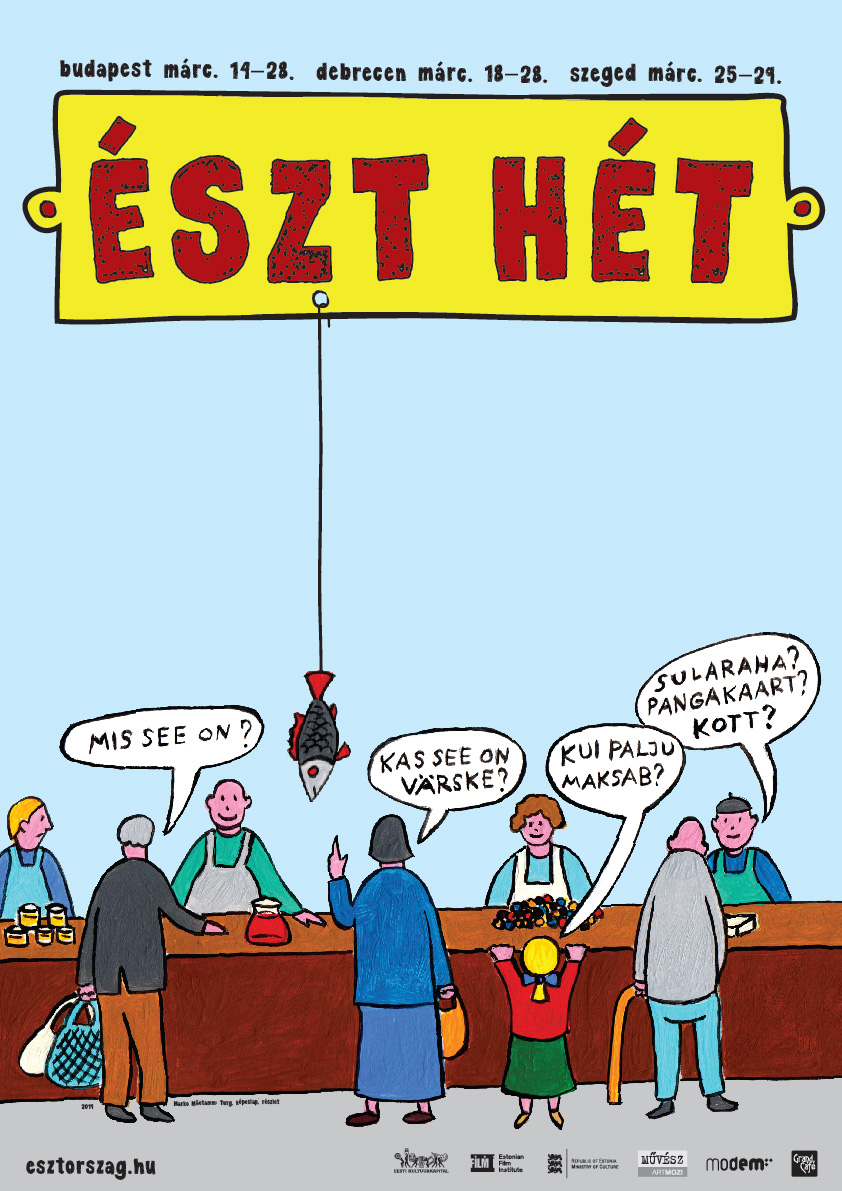 The Estonian Institute in Hungary is waiting for all the friends of Estonian culture to participate in the Estonian Week starting on March 14 in three Hungarian cities: Budapest, Szeged and Debrecen.

The culture week begins on the Native Language Day, March 14 with an Estonian language course at Massolit, a well-known literary café in Budapest, where the brand new Estonian language cards by Marko Mäetamm will be introduced. Together we learn a couple of essential Estonian words to surprise musicians, film directors and artists who have come from Estonia to the culture week. Since Estonian food can also be tasted in Hungary during the Estonian Week, one of the most active language learners will be awarded an Estonian lunch for two by one of the participating restaurants. The lunch will include scone, fish soup, hotchpotch and blueberry dessert.

The highlight of the Estonian Week is a concert of Captain Kirke and The Klingons, the new ensemble of Kirke Karja, that takes place at the jazz club Opus of the Budapest Music Center. The new ensemble includes five musicians: the extremely original brass player Liudas Mockūnas, the Nordic saxophone king Mikko Innanen, one of the brightest musicians of the French jazz scene, the contrabass player Etienne Renard, the beloved and versatile drummer Hans Kurvits and one of the most innovative jazz musicians in Estonia, pianist Kirke Karja. The concert has influences of metal, free jazz, minimalism, expressionism and, of course, European jazz music of the 21st century.

In all three participating cities, Estonian film also conquers the cinemas. New Estonian feature and documentary films will be shown at the event. The programme includes ‘Taming a Wild Country’ (Rodeo. Unistus tõotatud maast), ‘The Manslayer/The Virgin/The Shadow’ (Mehetapja/Süütu/Vari), ‘Take It or Leave It’ (Võta või jäta), ‘Vello Salo. Everyday Mysticism’ (Vello Salo. Igapäevaelu müstika) and a selection of new Estonian animated films. The film programme is opened by ‘The Little Comrade’ (Seltsimees laps) by Moonika Siimets. The local kindergarten children take part in the children’s morning, where the animated puppet film series about a girl called Miriam is shown.

The Budapest Center of Architecture (FUGA) presents Kristina Norman’s exhibition ‘Festive Spaces – Ideological Art in Time’: a contemplation on the production of ideological spaces and their use in different temporal and ideological contexts. The show combines the artist’s video with the same title with a photo series ‘Magical Transformations’, specially produced for the exhibition. The artist herself will present the work during the opening on March, 22nd.
Curator: Jan Elantkowski

Since Estonian Week never goes without Estonian literature, the culture club Nyitott Műhely presents two new translations. The long-time and fruitful translator of Estonian literature, Béla Jávorszky, discusses Viivi Luik’s book ‘The Seventh Spring of Peace’ (Seitsmes rahukevad). There will be the presentation of the Hungarian translation of Kätlin Kaldmaa’s work ‘No Butterflies in Iceland’ (Islandil ei ole liblikaid) with the participation of the author. In addition, well-known Hungarian actors will read Mudlum’s short story ‘The Year of Ladybirds’ (Lepatriinude aasta) in Budapest and Debrecen during the Estonian Literature Night. The short story was first published in Hungarian in a series of minianthologies issued by the Estonian Institute in last December. The publication dedicated to Mudlum can also be brought home by listeners.